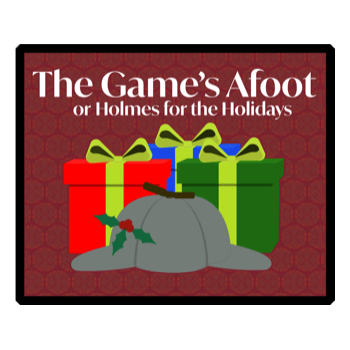 Hamilton County Theatre Guild proudly announces the cast and crew for “The Game’s Afoot” or “Holmes for the Holidays.” the first production in The Belfry Theatre’s 2020-21 season.

The holiday whodunit by Ken Ludwig is directed by Eric Matters of Fishers.

The show’s synopsis: Hailed as " Murderously Funny" by Broadway World, this quirky, clever mystery centers on 1930s Broadway star William Gillette, admired around the world for his leading role as Sherlock Holmes. Gillette invites fellow cast members to his Connecticut castle for a weekend of holiday festivities, but when one of the guests is stabbed to death, the fun in this isolated house of tricks and mirrors quickly turns dangerous. Gillette must assume the persona of his beloved Holmes in order to track down the killer. Join us for the non-stop twists, turns, and wild hilarity in this mystery thriller that promises to give you a wonderful holiday gift: everything you love about live theater.