AUDITIONS ANNOUNCED FOR 'FATHER OF THE BRIDE' 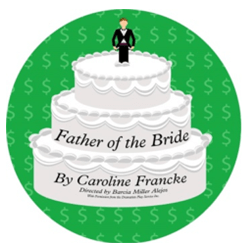 Hamilton County Theatre Guild announces auditions for "Father of the Bride" by Caroline Francke and directed by Barcia Miller Alejos.

Auditions will consist of readings from the script. No monologues required.

Please bring a list of all conflicts to the auditions.

Mr. Banks learns that one of the young men he has seen occasionally about the house is about to become his son-in-law. Daughter Kay announces the engagement out of nowhere. Mrs. Banks and her sons are happy, but Mr. Banks is in a dither. The groom-to-be, Buckley Dunstan, appears on the scene and Mr. Banks realizes that the engagement is serious. Buckley and Kay don't want a "big" wedding—just a simple affair with a few friends! We soon learn, however, that the "few" friends idea is out. Then trouble really begins. The guest list grows larger each day, a caterer is called in, florists, furniture movers and dressmakers take over, and the Banks household is soon caught in turmoil—not to mention growing debt. When Kay, in a fit of temper, calls off the wedding, everyone's patience snaps. But all is set right, and the wedding (despite more last-minute crises) comes off beautifully. In the end, the father of the bride is a happy, proud man, glad that the wedding is over, but knowing too that it was worth all the money and aggravation to start his daughter off so handsomely on the road to married life.

From the novel by Edward Streeter.

All ages listed are stage ages.

Any questions may be directed to Barcia Miller Alejos at barciaalejos@gmail.com